Greece is definitely a place everyone must visit sometime in their lives. It’s a place that has more islands then I could ever count. Better food then anything I’ve ever tasted. Sunsets you will never see anywhere else. Water as blue as the sky everyday. Clouds which are non existent. Cheerful, singing and dancing souls on the streets all night. One way roads which lead all down the coast, through lavender fields and open sands. Cascading cliffs with white houses built at the summit almost making the mountains appear snow-topped… I could never say enough about this wonderful wonderful place! But one thing I must mention is….. the donkeys!

One of my favorite memories of Greece was riding up the steep hill outside the port of Santorini. At first, my boyfriend Arden and I were a bit hesitant about riding the poor tired things. But we were assured by the little Greek men that they were trained and could withstand the pressure… or so we thought!

As we approached the group of Greek men sitting fanning off the heat, all wearing white collared shirts, little blue hats and pants, their faces all quickly light up at the sound of our request. The littlest of the men quickly got up and ushered us promptly up a few stairs up the hill. Eventually after walking a decent amount of steps, Arden and I began to question whether we would be walking the whole way up. The little man soon walked into a wooden gate which lead into a den of donkeys and horses. We began to yell “THE WHITE DONKEY!” at the little man- he looked sweet. The Greek man soon brought out a decorated white donkey attached to a large brown horse. Initially the plan was just for me to ride up on the donkey as Arden felt too sorry for the donkeys. But as we tried to explain this to the man in a complication of Greek and English yelling he continued to repeat “NOW WE HAVE A PROBLEM.”

What problem? As he pointed rapidly at the donkey and the horse we came to the conclusion that the horse was the leader, who led the donkey up the hill. A bit hesitant we quickly handed over the ten euro and hopped on our transport- for me the white donkey of course! The donkey began to trod up the steps as the Greek man began to yell something along the lines of “SHALLO“- shallow? gallop? gallo? Still not too sure to this day what he was saying, but it sure worked- that was until he disappeared back down the hill to his fellow men.

So there we were- looking as silly as ever. Two sweating Aussie travellers. One stuck on a donkey and one on a horse. We thought the man would be guiding us all up the hill? As the horse proudly made its way up, my donkey slowly followed but within a couple of seconds decided to take a pit stop at the corner. I guess he appreciated the view just as much as me. I think it was a solid twenty minutes of me trying to persuade Mr. Donkey to follow the pretty horse in front. I went through many stages- the laughing stage, the SHALLO stage, the HELLLLPPPP stage, the pleading passerby’s to assist stage, the anger stage and finally the “please donkey, just two more steps, come on just follow the horse, pleaseeeeee.”

I think heaven answered my prayers and just like in the movies I heard a small jingle of bells in the distance. Within minutes a troop of horses and donkeys pranced up the hill yelled at by an angry Greek man. All of a sudden my donkey (most likely scared what his donkey friends would think of him) picked up his pace and joined the army as we battled together up the steep, steep hill. Sure there were several corners of panting pit stops (the donkey out of tiredness, the passenger out of fear we would fall off the edge), but I’m proud to say my wonderful donkey got me to the top- and we even made it first!

LESSON: When the road to the top seems all too much- take a few pits stops, enjoy the view on the way and know that it’s okay to have a break- but keep on going because once you arrive, it will be the most spectacular thing you’ll ever experience! 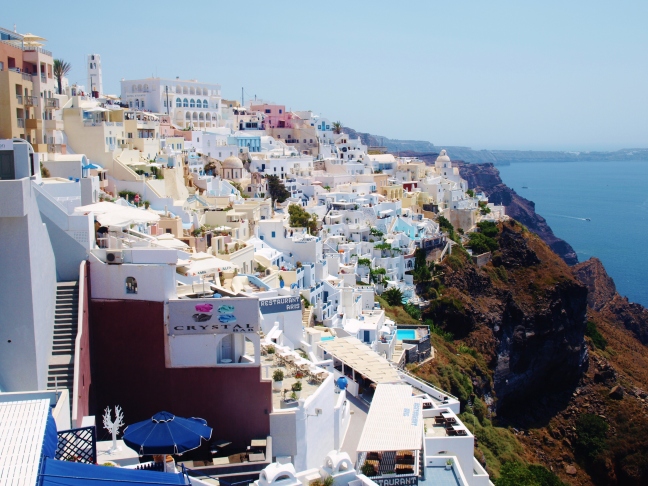 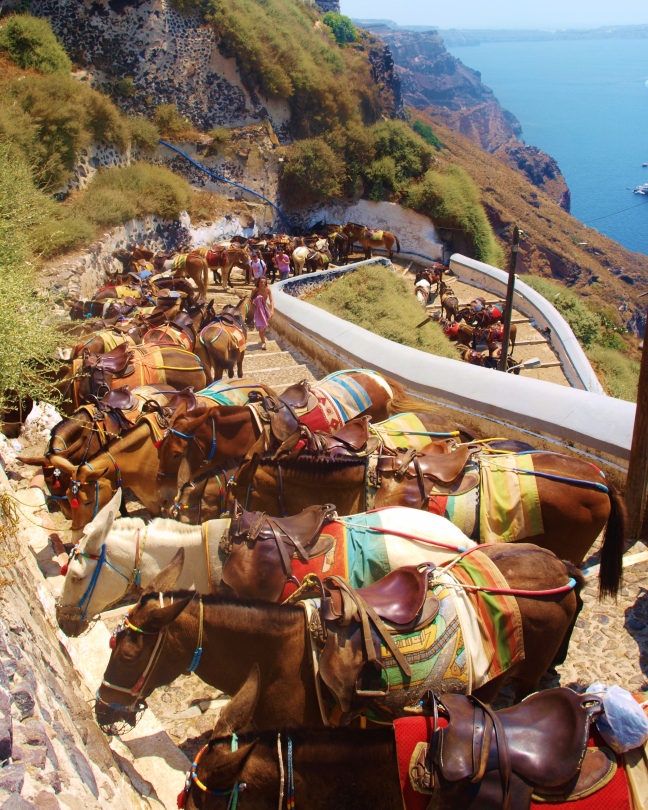 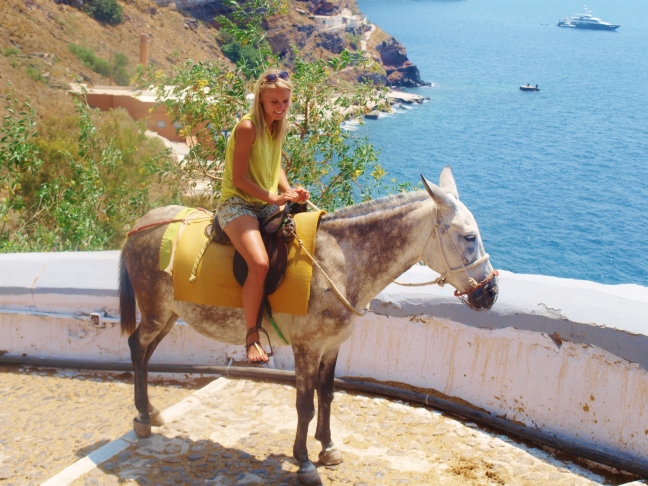 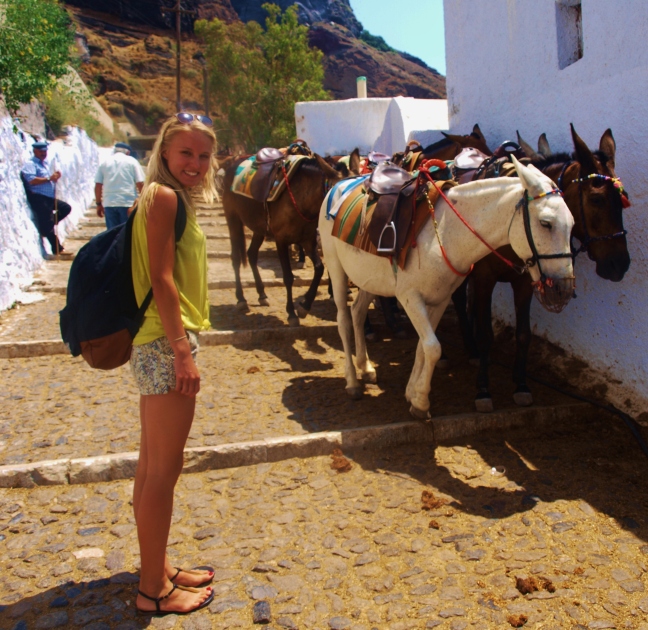 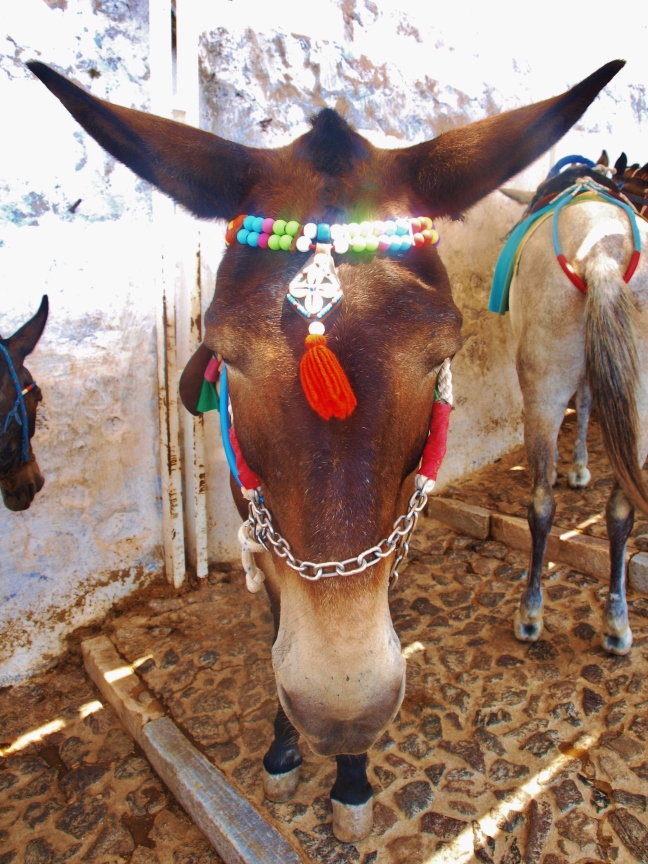 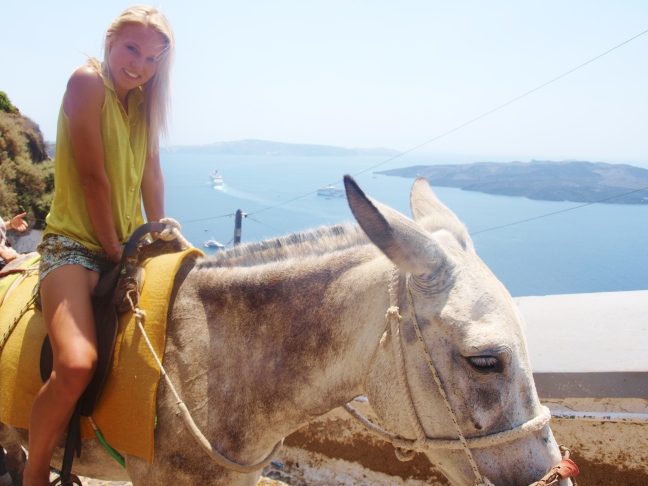 7 thoughts on “A Donkey’s Tale” 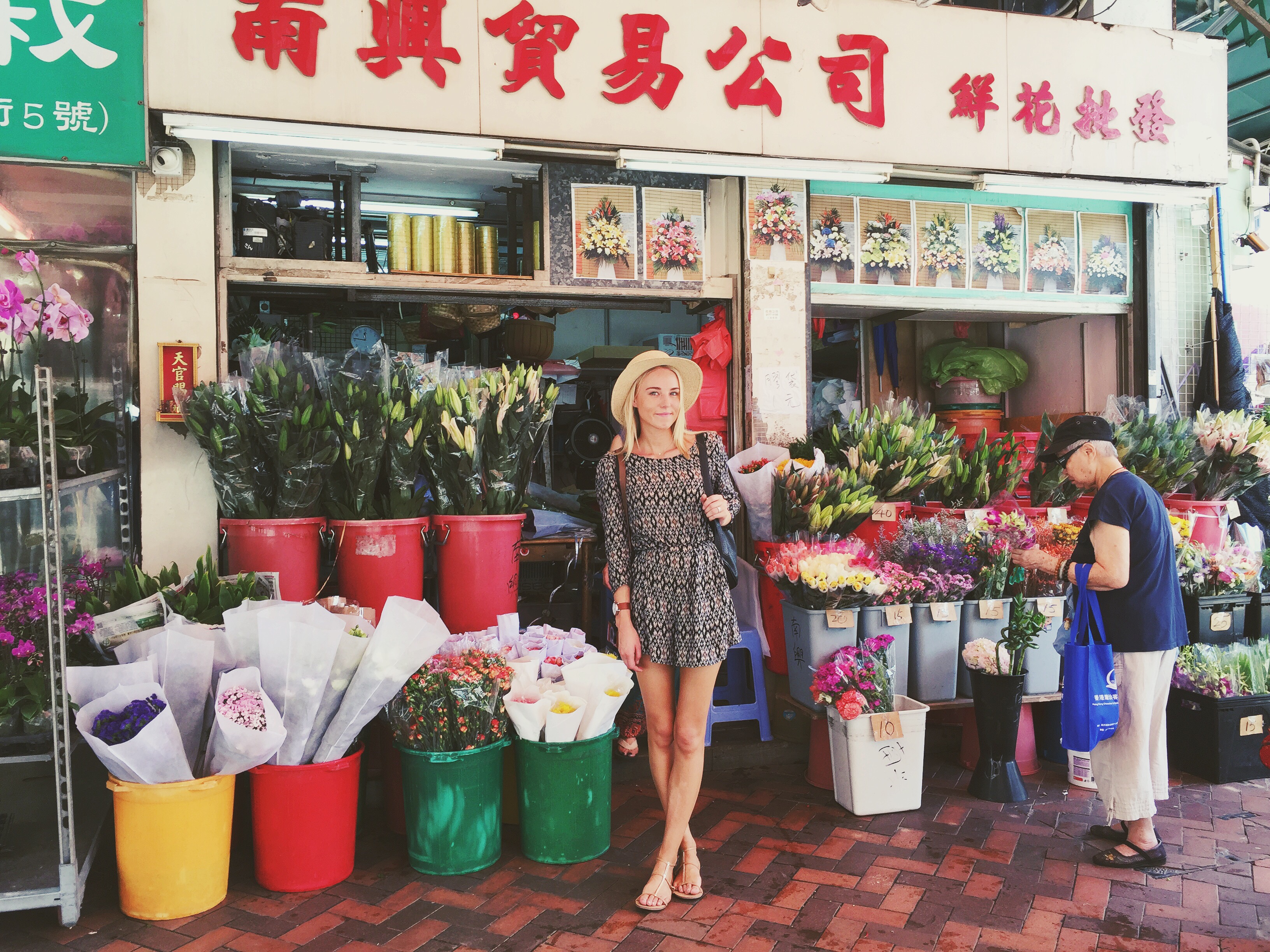 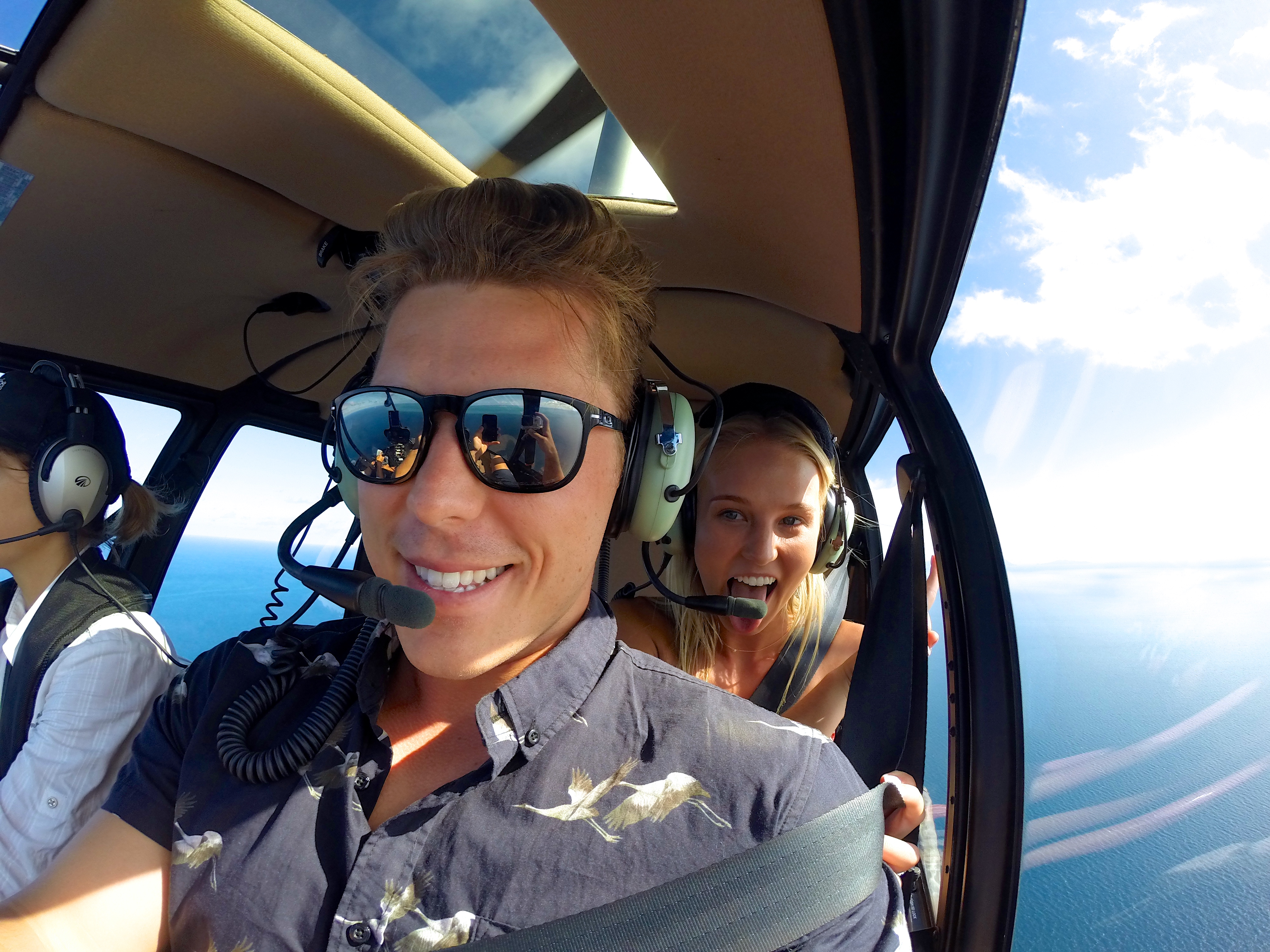 The Best of Queenstown, NZ 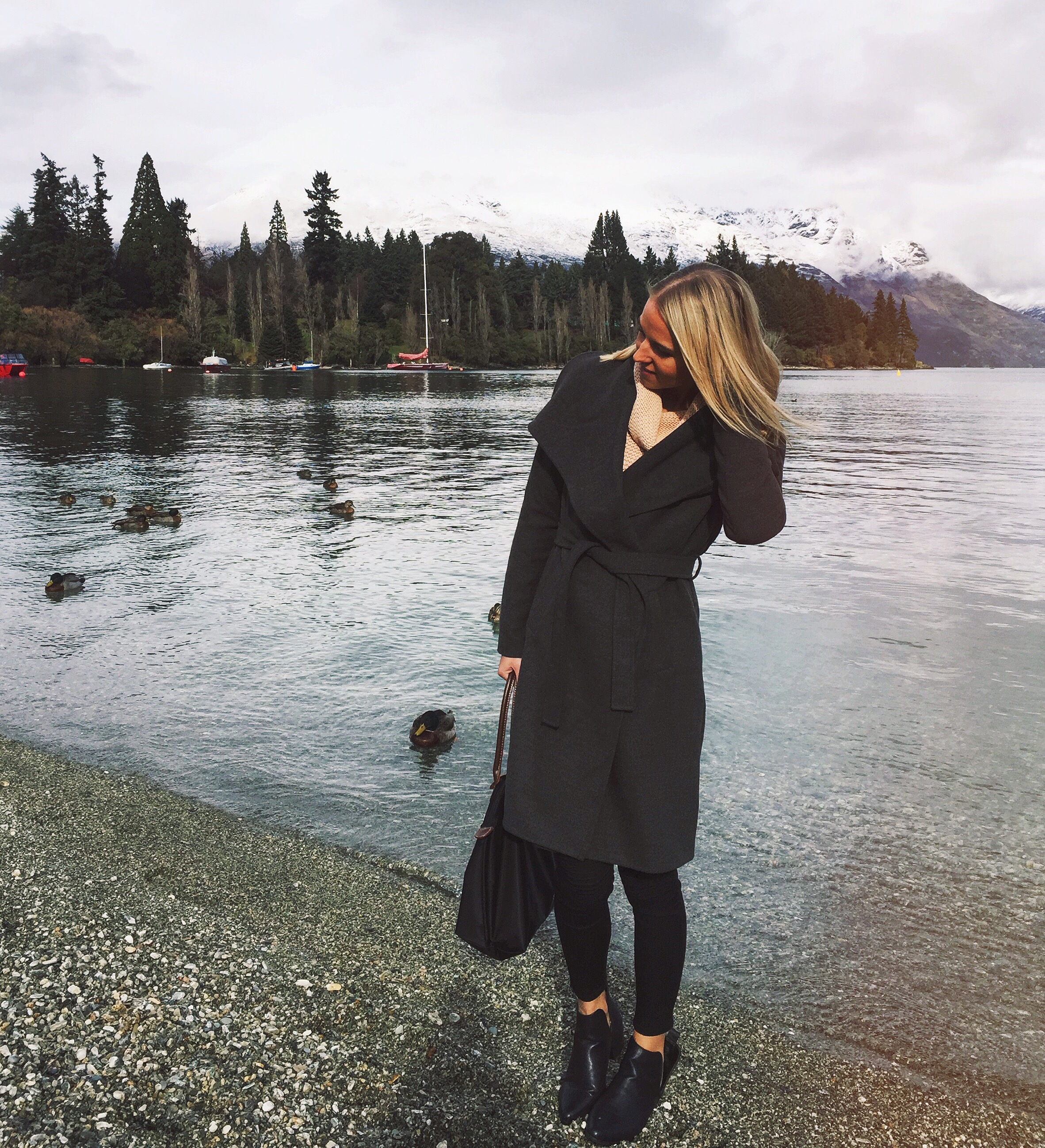